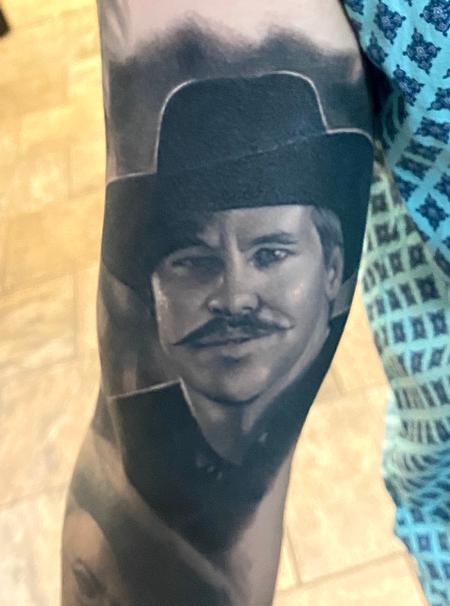 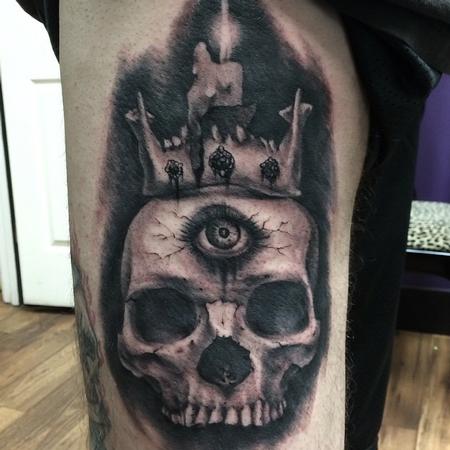 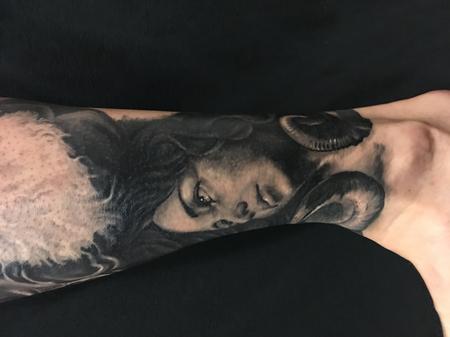 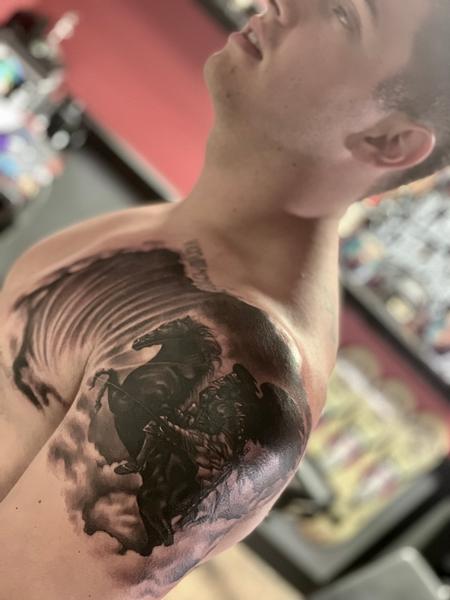 My story starts much like any middle-class American boy in the south.... Mom, Dad, and two kids living life in the country.  I was constantly getting in trouble for playing around and drawing on everything; my books, the desks, people, etc.  We didn’t have the label ADHD back then, we were just labeled “bad” kids.  When I was a teenager, my dad went off to do a couple years in a federal penitentiary.  While he was in there he started getting tattooed(other than the couple he had gotten during his time in Vietnam.)  Once he got out, he as well as his friends, were wanting to get tattooed and saw that I had a natural ability for art. They got together and brought me what was a very makeshift Tattoo set up and said “learn how to use this shit kid, we want tattoos!”  Being the punk kid that I was, this seemed like a great idea and I couldn’t get started fast enough! I spent a few years tattooing him and his friends and when the opportunity arose and they helped me get my foot in the door of an old school biker tattoo shop.  This is where I got my real start.

I began professionally tattooing in 1995. I learned the old-fashioned, old school, you have to show you really want it, way!  I was taught early on that to make it doing anything in this world, you have to stay humble and keep your ego in check. That philosophy has helped me immensely over the years and along the way.  After working in multiple shops throughout the late 90s and early 2000’s, I opened my own shop in a little town outside of Waco, Texas.  Southern Culture Kustom Tattoos opened in 2002 in Lorena, Texas.  It was in a little rundown building on the side of the highway with two artists and a piercer, but it was mine! It was crazy and fun, and I grew as an artist by having it. As I grew as an artist, so did my business and my family. Eventually in 2011, my wife Chonna and I opened Infamous Ink in Waco, Texas with eight artists and two piercers. We learned a lot and have come such a long way!

My tattooing style has changed over the years. Although my foundation in tattooing was a bit of traditional mixed with 90s biker style tattoos, what really captured my attention and I have always been drawn to was the black and grey work that I originally saw out of the prison tattoos. Over the years that would become my focus, Black and Grey realism. It is what i currently specialize in but, on occasion, I will do a cool traditional or color tattoo just to mix it up a bit!

I have won many awards throughout the years for portraits, black and gray, color, as well as quite a few Best of Show and Best of Day trophies. That being said, the best award I can receive is always a clients look of pure happiness when they see their tattoo for the first time and I realize that I have given them something they will cherish for a lifetime. We, (tattooers) are given a gift that some don’t understand or respect, the gift of complete trust to us from a client to mark their body for life.  That is a true honor and I strive to do every tattoo to the best of my ability no matter how big or small the tattoo or cost.

I have come a long way from that kid who got in trouble all the time for drawing or the punk that tattooed his dads friends.  I am a devoted husband to an amazing woman that has been the girl of my dreams since the moment I laid eyes on her!  I am a proud father to four beautiful children; Serenity, Dylan, Callie, & Ryder!  My family is what keeps me going when everything else seems too crazy and it is what makes everything that I do worth the struggle.  They are my inspiration and my strength. I love what I do and I hope to keep on tattooing for many years to come, but at the end of the day, my family is my peace.

Watch The Trailer Below